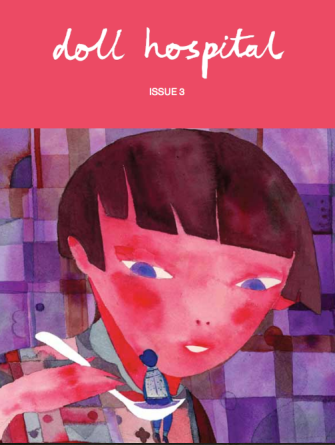 What inspired you to start Doll Hospital?

I started Doll Hospital in 2014 when I was 23 and a suicidal master’s student at Oxford. I’m 25 now and a suicidal PhD student at Central Saint Martins, so, like, ‘inspiring’ may not be the best word but hey, in two and half years we’ve put out three 150 page plus full colour issues which is cool. My reason for starting it wasn’t particularly worthy. I was literally just told by my friends to stop tweeting about killing myself as it was freaking everyone out so I was like ‘screw you guys I’ll find another space to make people uncomfortable!’—which is a hilarious backstory in my humble opinion.

Could you tell me how you chose the provocative title?

I came across the phrase ‘doll hospital’ in the 2012 Spring/Summer edition of Another Magazine, the author Joe Dunthorne had curated a photo series, pairing quotes with interesting images. One of the quotes read something along the lines of ‘this is the doll hospital, they come to me broken and I bring them new life’. I just became totally taken in by that line! I had also recently read The Bluest Eye, and the notion of deconstructing white supremacy via the imagery of the doll, of Shirley Temple, was so powerful to me. From then on all my social media was under the handle ‘doll hospital’. I just thought it was the best combination of words, so inevitably when it came to choosing a title for the journal I went with Doll Hospital too!

I don’t actually collect dolls, or even like dolls. I find them kind of creepy, aside from the Barbies I had when I was a kid, so I find it really funny that we’ve gotten complaints from readers that when they try and search for our journal on Instagram or whatever they have to trawl through a bunch of images of corny mutilated doll photos—which is very Daniel Clowes art-school satire video art to be honest. It’s funny how earnest that imagery is isn’t it? So easy to parody in youth culture comedy or whatever.

“We’re not some kind of feel good project, we don’t have an agenda or a singular mission. Doll Hospital is just one space to explore mental health in a culture that limits mental health dialogue in so many different ways.”

In what ways does the journal seek to address mental health issues?

We’re not some kind of feel good project, we don’t have an agenda or a singular mission. Doll Hospital is just one space to explore mental health in a culture that limits mental health dialogue in so many different ways. I just want to cultivate a pressure free space to explore mental health narratives and experiences that are regarded as too shameful and marginal to merit mainstream reflection. For instance, it’s wonderful newspapers and websites and such are dedicating a little more attention to depression and anxiety, but mental health narratives are so vast, there are so many stories and so much to say.

What role do you think art and literature can play in creating a dialogue about mental health?

It may be incredibly counterintuitive to say this, as I run an art and literature journal on mental health and whatnot, but the traditional framing of art and literature in conversation with mental health can be incredibly damaging. I receive so many emails from people who do not feel ‘worthy’ of mental health struggles because they do not see themselves reflected in art and popular culture. Here, fictitious characters carry more clout than actually mentally ill people, which is all kinds of bizarre, and is an issue I’m addressing through a documentary film project with my pal Claire Biddles called Sad Girl Cinema. This failure can be changed via creativity, but a creativity that does not build its foundations on a capitalist model of aggressive individualism that can only serve a few (or rather consume a few) whilst alienating many.

What made you decide to produce a print journal rather than an online publication?

I think people often take a very reductive and reactionary approach to the relationship between print and the digital, pitting one against the other, fetishizing the book against the digital or think piecing over how the internet is killing the print industry. I actually did my master’s thesis on the romanticisation of print media in digital spaces (you know like low res memes of old books and whatnot) and gave a Master’s class on this subject at Central Saint Martin’s last month, so it’s a subject I love thinking about in so many different ways.

These attitudes are not only unhelpful but unrepresentative. I came to print via the digital due to tumblr’s embrace of zine culture, a medium I was not familiar with until I joined the site in my teens. Through online image sharing I further connected with the radical history of print, from the ingenuity of ACT UP to the innovative presses of radical women of colour, with the anthology This Bridge Called My Back being one of my favourite books, and one of the biggest inspirations for Doll Hospital.

How can readers find you?

You can keep up with us on our website, twitter, tumblr and Facebook. You can purchase our issues over at our big cartel store and you can read our issues at the Interference Archives, The Wellcome Collection and Glenside Hospital Museum.

Do you welcome submissions?

Of course! Doll Hospital is an open submission journal to ensure we get as many different submissions in as many mediums as possible. We’ve run out of room for text-based submissions for our next two issues (essays, poetry and so forth) but we still welcome visual contributions such as comics and illustrations. The open submission style of Doll Hospital is so much fun: going into our inbox to see new voices and new creations is the best feeling ever, I’ve made so many great friends and cool connections through people just reaching out to us.

Could you tell me a little bit about the next issue?

I’m actually so excited for issue four. We’re basically done, it’s just being proofed now! We have so much amazing stuff: from interview features with Katie Green, Mimi Khúc and Clem Martini; reflections on the intersection of police brutality and psychosis, personal writing on sight loss and mental health; comic work by Simone Lia and Lottie Pencheon; in-depth writing on dissociative identity disorder, dermatillomania and surviving mental health struggles when living under poverty. Our next issue unpacks so many experiences, in so many different ways, I can’t way for you to see it!

Find out more about Doll Hospital at dollhospitaljournal.com.

Bethany Rose Lamont is a second year PhD student and the editor in chief of Doll Hospital.