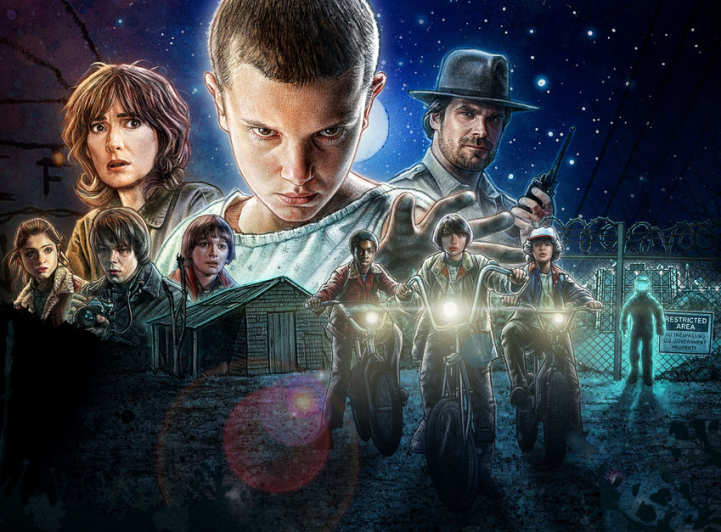 The word ‘stranger’ can suggest many things. One antiquated definition, used in the 18th and 19th century, refers to ‘things which are popularly imagined to forebode the coming of an unexpected visitor’ (OED). These ‘things’ might refer to tea leaves floating in a cup, a moth appearing suddenly out of the dark, or candlewax that causes the light of a flame to flicker and die. For viewers of Netflix’s thrilling new drama, Stranger Things, this superstition holds a unique significance.

Stranger Things focuses on the search for a boy who goes missing from an American suburban community in the fall of 1983. The official line of inquiry is led by police chief Hopper (David Harbour), while the boy’s mother Joyce (Winona Ryder), brother Jonathan (Charlie Heaton), and his childhood friends (Finn Wolfhard, Caleb McLaughlin, Gatan Matarazzo) each explore alternate methods. The boy’s disappearance is made more enigmatic by puzzling electrical disturbances, mysterious child visitors, and secretive government agencies.

Written and directed by the Duffer Brothers (twins born in 1984), Stranger Things is a celebration of popular horror and science-fiction narratives of the 1970s-1980s. There are direct homages to a number of films and novels of the period, from Stephen King’s Firestarter (1980) and It (1986), to Steven Spielberg productions like Poltergeist (1982), The Goonies (1985) and E.T. the Extra-Terrestrial (1982). For a nostalgic audience, keeping up with these visual references is part of the show’s appeal. Through its pulsing synth-based soundtrack, to its distinctive opening sequence, to its close attention to period detail, Stranger Things manages to recreate a world that is passed.

But the key to the show’s success is not how it reproduces 80s culture for a new generation, but the way it reinvents its key themes and preoccupations. It alerts us to yet another definition of the word ‘stranger’, a process whereby something familiar is made strange or different, where something is altered to become surprising or unaccountable. It can turn something recognizable upside-down. Like Richard Kelly’s cult hit Donnie Darko (2001), Stranger Things reinvents the vocabulary of American Suburban Gothic for a 21st century audience.

Secrets of the American Suburbs

What we understand as American suburbia can be traced to the immediate aftermath of the Second World War. During the 1950s and ‘60s, the country witnessed a period of increasing economic wealth and prosperity, but the era also ushered in new kinds of societal repression. In the suburbs, moral values consolidated around the ideals of the stable nuclear family and found expression through the growing omnipotence of the television set.

“Suburban Gothic, a genre that utilises mystery and suspense to reveal a site of repressed violence and desire.”

During this period, we begin to see a growing appetite for texts like Richard Matheson’s post-apocalyptic zombie novel I am Legend (1954) (my review), and Rod Serling’s mystery/sci-fi series, The Twilight Zone (1959-1964). In the 1970s and ‘80s, we see a new stage in the genre’s maturation: Ira Levin’s The Stepford Wives (1972), John Carpenter’s Halloween (1978), and David Lynch’s Blue Velvet (1986), to name just a few. Each of these books, movies, and TV shows belong to what is generally known as American Suburban Gothic, a genre that utilises mystery and suspense to reveal small-town suburbia as a site of repressed violence and desire.

The Uncanny Return of the Suburban Gothic

The books and movies that give Stranger Things its genetic makeup are all, in their way, products of a post-Watergate America. The films of the ’70s and ’80s, such as Poltergeist and E.T., present a new generation of suburban American children living in a climate of cultural fear, anxiety, and distrust. Suburban Gothic during this period also explores, in various ways, the legacies of Vietnam and American violence committed abroad. Written in the 1980s, Stephen King’s It traces the legacy further back, to the Second World War, and then to the founding of the earliest Puritan townships. In each case, the texts present us with children who are struggling to negotiate the violence that previous generations have committed. Suburban Gothic presents idealised American suburbia as a conflicted site of repressed history and oppression.

Stranger Things is haunted by the same questions and concerns. (It’s notable that Matthew Modine plays one of the show’s chief antagonists, Dr Martin Brenner, an actor best known for his lead role in Stanley Kubrick’s scathing 1987 Vietnam drama Full Metal Jacket). If the children of Stranger Things were born during the height of Watergate and Vietnam, the children of today’s suburbs were born in the immediate aftermath of 9/11. (Several of the child cast members were born in the fall of 2002.) This kind of uncanny doubling between the cultural anxieties of the late ’70s and ’80s, and the cultural and political landscape of 21st century America, feeds into the show’s mass appeal.

The popularity of Stranger Things owes something to what Suburban Gothic does best: it articulates the cultural anxieties that lurk beneath the surface. It is able to show us, through fantasy, what we do not always have the words to describe ourselves.