I’m currently teaching a literature module at Cardiff University entitled Utopia: Suffrage to Cyberpunk, which traces the development of utopian/dystopian writing in the twentieth-century. Yesterday’s lecture included something of a surprise, when Margaret Atwood  took time to share a few words the group via Twitter. We spent a few minutes at the end of the lecture following her sage advice, collectively acquainting ourselves with the wonders of Thug Notes.

Like Loading...
by Rhys Tranter on 21 October 20161 June 2018
The author talks about his new book, his influences, and his fascination with modern urban spaces

What made you choose the title “Imaginary Cities”?

I had more romantic or esoteric titles in mind but it had to be something simple to give, what is a fairly sprawling and extremely rambling text, a sense of coherence. I’ve always liked books with minimalist titles; The Castle, The Plague, Notes from Underground, The Tin Drum, The Lottery. They seem far more evocative to me than The Lighthouse-Keeper’s Daughter-type titles you see a lot. At the same time, my intention was to write something that isn’t self-contained; a book that somehow spills out of its pages and into the world. Reading Susan Sontag’s On Photography, I was initially frustrated that she hadn’t included the photographs she was writing about. Later I came to realise this was a godsend as it sends you out searching and you end up finding entire worlds you didn’t know about – Diane Arbus, Roman Vishniac, Weegee, Vivian Maier. I tried to do the same with Imaginary Cities. I wanted to send people out looking for Sant’Elia or Chernikhov or whoever. It would be as much a map as a book.   END_OF_DOCUMENT_TOKEN_TO_BE_REPLACED

This year marks the 500th anniversary of Thomas More’s Utopia. Despite its advanced age, More’s compelling vision of a perfect society remains a quintessentially modern aspiration. Utopia is hailed as ‘astonishingly radical’ by contemporary political thinkers, and the text continues to offer inspiration and renewal for writers, artists, and filmmakers.

The perfect island of Utopia is a dream of societal harmony and order, not unlike the Biblical garden paradise or Plato’s Republic. More’s early modern work is considered a canonical text of Western literature and culture, providing a template to which we might one day aspire. But Utopia is also a perplexing and troubling text. More’s explorer protagonist, Raphael Hythloday, is presented as a companion of Vespucci on his voyage to the New World, which binds the utopian dream to the European invasion and colonization of America. It is no coincidence that there are slaves on the island of Utopia. Despite its associations with liberal thought and communal happiness, the island of Utopia has a rigid societal hierarchy and strictly-regulated communal laws. END_OF_DOCUMENT_TOKEN_TO_BE_REPLACED

“The Handmaid’s Tale was published in 1985 to overwhelming critical acclaim. It won the Governor General’s award for English-language fiction that year, and the inaugural Arthur C Clarke award in 1987. Often labelled a feminist dystopia, the novel captivates and terrifies in equal measure. Is Gilead the result of puritanism, misogyny and megalomania taken to their logical end? Is Atwood shooting readers a warning that this is where fanaticism and militarisation at the expense of humanity might lead?”

More at The Guardian.

From Open Culture: “One of the very first feature-length sci-fi films ever made, Fritz Lang’s Metropolis took a daring visual approach for its time, incorporating Bauhaus and Futurist influences in thrillingly designed sets and costumes. Lang’s visual language resonated strongly in later decades. The film’s rather stunning alchemical-electric transference of a woman’s physical traits onto the body of a destructive android—the so-called Maschinenmensch—for example, began a very long trend of female robots in film and television, most of them as dangerous and inscrutable as Lang’s. And yet, for all its many imitators, Metropolis continues to deliver surprises. Here, we bring you a new find: a 32-page program distributed at the film’s 1927 premier in London and recently re-discovered.” [Read More]

From BFI: “Director Terry Gilliam reveals insights about Brazil (1985), his Orwellian retro-futurist fantasy. Gilliam also talks about his love of 2001: A Space Odyssey (1968), his dislike of middle management bureaucracy, and his experience of casting Robert De Niro.” (Source: BFI)

Well, no. But, nonetheless, her late-1990s dystopian novel, The Parable of the Talents, anticipates troubling undercurrents in the culture of the United States. And there are some noteworthy similarities to the 2016 presidential election. Open Culture reports:

“[I]n the second book of her Earthseed series, The Parable of the Talents (1998), Hugo and Nebula-award winning science fiction writer Octavia Butler gave us Senator Andrew Steele Jarret, a violent autocrat in the year 2032 whose ‘supporters have been known… to form mobs.’ Jarret’s political opponent, Vice President Edward Jay Smith, “calls him a demagogue, a rabble-rouser, and a hypocrite,’ and—most presciently—he rallies his crowds with the call to ‘make America great again.'”

The article also finds Trump predictors in a host of other pop culture sources, from The Simpsons to the Back to the Future franchise.

Like Loading...
by Rhys Tranter on 31 May 20161 June 2016
Rachael Steven (Creative Review) on Chadwick’s new illustrated book, published by Phaidon

Born and raised in Middlesbrough, graphic designer Peter Chadwick grew up in a town surrounded by concrete. His fascination with Brutalism began with a glimpse of the Dorman Long Coke Oven Tower, a monolithic structure with a single row of narrow windows and the company name printed in stark lettering on one side. “Uncompromising and faceless, the structure fuelled my imagination,” he says. “I didn’t realise it was possible to build something so tall and so imposing using only concrete.”

Now, after decades researching Brutalist buildings around the world, Chadwick has compiled a book celebrating the divisive architectural style. This Brutal World features hundreds of black-and-white images of apartment blocks, chapels, theatres, galleries and hospital buildings from Sheffield to Nepal and Tokyo. Many were built in the 1960s and 70s but there are plenty of contemporary examples too, highlighting Brutalism’s influence on architects from Thomas Heatherwick to Zaha Hadid. END_OF_DOCUMENT_TOKEN_TO_BE_REPLACED

In Samuel Beckett’s literary landscapes, readers and viewers find dark, barren spaces, crippled characters, haunting voices, and an overall sense that there is “Nothing to be done” (Waiting for Godot). The hope that appears in the presence of a boy or a few leaves on a tree is soon negated by the shake of a head or the absence of a long awaited arrival. Beckett’s worlds are full of ashes and bones in which men and women are exiled and isolated; they are depleted, lonely spaces; they are dystopian spaces. END_OF_DOCUMENT_TOKEN_TO_BE_REPLACED

Like Loading...
by Rhys Tranter on 4 April 201612 May 2016
Edward Docx (The Guardian) reviews the controversial new novel by Dave Eggers 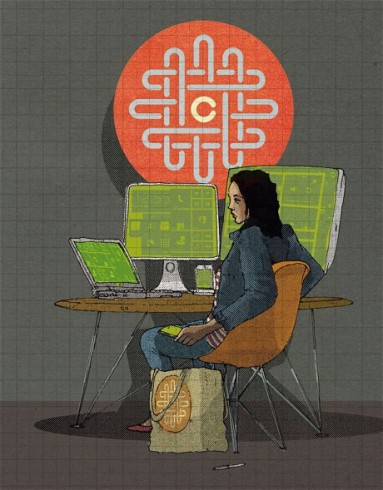 In a recent essay published in these pages, Jonathan Franzen inveighed against what he sees as the glibness and superficiality of the new online culture. “With technoconsumerism,” he wrote, “a humanist rhetoric of ’empowerment’ and ‘creativity’ and ‘freedom’ and ‘connection’ and ‘democracy’ abets the frank monopolism of the techno-titans; the new infernal machine seems increasingly to obey nothing but its own developmental logic, and it’s far more enslavingly addictive, and far more pandering to people’s worst impulses, than newspapers ever were.”

I cite this because it chimes with the points that Dave Eggers is making in his latest novel, The Circle; we are at an interesting moment when two such significant figures of American letters have both independently been so moved to expound on the same subject. But my guess is that Eggers won’t suffer the same online crucifixion that has subsequently been Franzen’s fate. Why? Because although Eggers is saying all the same things as Franzen (and so much more), he makes his case not through the often tetchy medium of the essay, but in the glorious, ever resilient and ever engaging form of the novel.

The Circle is a deft modern synthesis of Swiftian wit with Orwellian prognostication. That is not to say the writing is without formal weaknesses – Eggers misses notes like an enthusiastic jazz pianist, whereas Franzen is all conservatoire meticulousness – but rather to suggest that The Circle is a work so germane to our times that it may well come to be considered as the most on-the-money satirical commentary on the early internet age. [Read More]

Jim Clarke (The Guardian) on the cultural proliferation of new vocabularies of expression.

4th Estate have collaborated with the artist Stanley Donwood, known for his work with the rock group Radiohead, to produce a series of luminous, beautiful, surreal, and contemporary designs for 21 of J.G. Ballard’s works. Donwood is known for the way he playfully manipulates the signs and symbols of modern life, in colour and collage, and his signature style is ideally suited to Ballard’s aesthetic. The new editions, which come complete with a series of illuminating introductions, will welcome a whole new generation of readers to Ballard’s fantastical and prophetic worlds. Extremely impressive.

END_OF_DOCUMENT_TOKEN_TO_BE_REPLACED

Like Loading...
by Rhys Tranter on 14 February 20163 December 2017
Zak Bronson on Salvage: #1 Amid This Stony Rubbish
In his novel Railsea (2013), China Miéville portrays a postapocalyptic world littered with endless layers of leftover consumer waste. Salvors pick through mountains of junk, hoping to uncover secrets from the pre-apocalyptic world. Cut off from the past and lacking any framework for understanding these objects, characters are left sifting the rubble, picking through the remnants of history, and taking what is useful while discarding the rest. As one character explains, “you don’t uncover the past if you’re a salvor: you pick up rubbish.” Railsea provides an example of what Miéville and Evan Calder Williams have termed salvagepunk, a genre of postapocalyptic fiction that ranges from the post-oil catastrophe narratives of the Mad Max series to the collage aesthetic of Hayao Miyazaki’s Howl’s Moving Castle (2004). In these works, characters attempt to survive by picking through the waste of the Earth, combining and repurposing objects and ideas from the past based on their value within hostile environments.