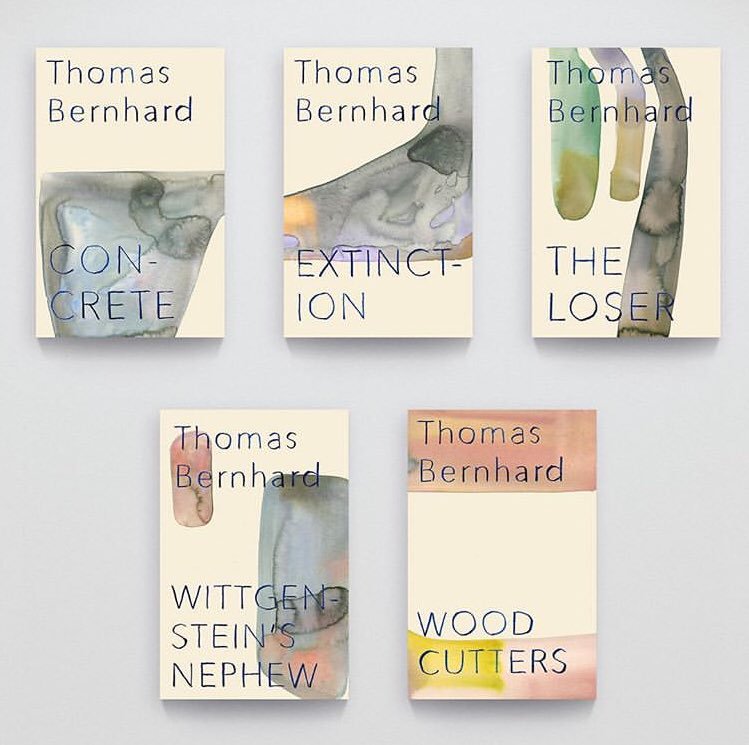 Faber and Faber is reissuing five Thomas Bernhard novels with new artwork designed by Leanne Shapton. Concrete and Extinction arrive on 7 March 2019, followed by The Loser, Wittgenstein’s Nephew and Woodcutters later in the year. Beautiful!

Went cycling to Cardiff Bay barrage with Jennifer this morning. We sat for some time in the sunshine, before deciding to return to the cool shade of the apartment. I’m still reading Tolstoy‘s Anna Karenina, which is just superb. I have also come across a number of interesting articles, reviews, and commentaries from around the web:

Like Loading...
by Rhys Tranter on 4 December 20163 December 2017
A new fully-illustrated volume offers a fascinating portrait of Austria’s most significant post-war writer

In the summer of 1970, experimental filmmaker Ferry Radax arranged to meet with the Austrian writer Thomas Bernhard. Over the course of three days, Radax recorded the writer amid the pleasant surroundings of a park in Hamburg. For readers familiar with Bernhard’s work, the setting was incongruous: his novels Frost (1963), Gargoyles (1967) and The Lime Works (1970) portray dark, grotesque landscapes of murder, ignorance, and obsession. As Bernhard himself admits, ‘I am hardly a cheery author’. And yet, in such bright and affable settings, Radax manages to capture a revealing portrait of the writer George Steiner called ‘the foremost craftsmen of German prose after Kafka and Musil.’

Blast Books, an independent publisher in New York, has taken a great deal of care to adapt Radax’s film, entitled 3 Days, into a book. The beautifully presented hardback volume includes Thomas Bernhard’s own reflections on Radax’s film, and a fully-illustrated record of the documentary translated from the German by Laura Lindgren. Also included is a critical afterword by film scholar Georg Vogt, and a fully-illustrated appendix of Radax’s notes for the filmmaking. The book makes considered use of space, word, and image to capture the spirit of Radax’s documentary, and the rhythms and emphasis of Bernhard’s monologues. END_OF_DOCUMENT_TOKEN_TO_BE_REPLACED

Grandfathers are our teachers, our real philosophers. They are the people who pull open the curtain that others are always closing. When we are with them, we see things as they really are – not just the auditorium but the stage and all that goes on behind the scenes. For thousands of years grandfathers have taken it upon themselves to create the devil where otherwise there would have been only God. Through them we see the drama in all its fullness, not just a pathetic bowdlerized fragment, for what it is: pure farce. Grandfathers put their grandchildren’s heads where at least there is something interesting to see, even if it is not always easy to understand; and by always insisting on what is essential they save us from the dreary indigence in which, were it not for them, we should undoubtedly soon suffocate.

Excerpted from Thomas Bernhard, ‘A Child’ in Gathering Evidence: A Memoir (translated by David McLintock).

Like Loading...
by Rhys Tranter on 29 March 201629 March 2016
An extract from one of Steiner’s literary reviews
I’ve been poring over a collection of George Steiner’s articles from The New Yorker magazine. It’s a fascinating selection that includes shrewd reflections on an impressive range of writers and thinkers. Among them are essays on Graham Greene, George Orwell, Jorge Luis Borges and Samuel Beckett. But for now, Steiner’s remarks on the work of Austrian writer Thomas Bernhard are catching my eye. Steiner was one of the first critics writing in America to recognize the significance of Bernhard’s work, and his 1986 essay for The New Yorker offers an insightful and enthusiastic appraisal…

END_OF_DOCUMENT_TOKEN_TO_BE_REPLACED

Like Loading...
by Rhys Tranter on 29 January 201629 January 2016
Author of Wittgenstein Jr and the Spurious trilogy of novels describes Bernhard’s devilish sensibility

Thomas Bernhard is a kind of figurehead for many authors, I think. I’m reminded of what Henry Rollins said of Mark E Smith in a documentary about The Fall:

He really is that guy you really hoped you could be. If you were in a band, you really don’t want to care what people think, but you do. And you really want to crank out a record every nine months, but you can’t. And you’d love to keep surprising people and baffling your critics by every third album turning out your best music.

Bernhard’s reclusiveness from the literary scene, his intransigence, the barbed acceptance speeches he gave for literary prizes, make him an exemplar. He just doesn’t care what the literary world thinks. At the same time, he writes and writes, one masterpiece following on the heels of another. END_OF_DOCUMENT_TOKEN_TO_BE_REPLACED

And lead us not into doxa… I have an uneasy feeling that Roland Barthes, were he still alive, would have doubts about this venture. An academic journal bearing his name and devoted to his work? In English? The noun ‘studies’, with its ring of stillness and seizure? The implicit claim to a field or a fold? Is not the very idea of a publication called Barthes Studies at odds with the drift, the unlearning, the reinvention, the non-arrogance, the escape, the non-vouloir-saisir, and the ‘desperate resistance to any reductive system’ which so often fire the pages of Roland Barthes? Might not this journal set or settle at once into doxa – that fatal term enlisted repeatedly in Barthes’s work to describe established knowledge, common sense, the obvious, the natural, what-goes-without-saying? Have I forgotten that Barthes told the audience at the conference held in his honour at Cerisy-la-Salle in 1977 that he had twice refused the invitation, and that he only accepted on the third occasion because he did not wish to create the image of ‘hewho-refuses-conferences-in-his-name’?

END_OF_DOCUMENT_TOKEN_TO_BE_REPLACED

Like Loading...
by Rhys Tranter on 5 November 20154 December 2015
A new collection, published in English for the first time

November 13 marks the release date of one of our proudest moments here at Three Rooms Press: the release of the first English translation ever of world-renowned Austrian author Thomas Bernhard’s first book, On Earth and in Hell, early poems, translated from the German by the remarkable Vienna-based poet Peter Waugh.

The book caught the attention of famed poet Edward Hirsch, who raves, “These hard won-poems, these furious convulsions, by turns savage and tender, mark the beginning of Thomas Bernhard’s true work, his first startling blows. It is deeply illuminating to have them so wonderfully translated into English.”

National Book Award Winner Jaimy Gordon (Lord of Misrule) was likewise impressed. In her introduction, she writes, “In these poems, written in Bernhard’s mid-twenties . . . all the matter of the subsequent malicious laughter is there—the self-splitting disgust and nostalgia, the hyperbolic despair, the failed (desired but also scorned) glory, the juxtaposition of village idyll and doom, of scathing superiority and terminal degradation, of sex and nauseated frailty and exhaustion.” END_OF_DOCUMENT_TOKEN_TO_BE_REPLACED