Skip to content
by Rhys Tranter on 17 January 201817 January 2018
Former American novelist reveals what he’s been doing since giving up writing back in 2010.

In an engaging email interview conducted by Charles McGrath of The New York Times, former American novelist Philip Roth reveals what he’s been doing since giving up writing back in 2010. He is in good health, and now spends most of his time living in his Upper West Side apartment in New York, meeting with friends and attending concerts — the Connecticut home where he wrote his novels remains unoccupied until the summer months. He has spent the past few years working closely with an official biographer, Blake Bailey, and supervising the final volume of the Library of America edition of his work.

The retired writer has also been watching the major developments unfolding across American culture. Roth identifies the current political moment in America as unprecedented in its history, and doesn’t mince words when describing the current President of the United States: he calls him a “massive fraud” who is “devoid of everything but the hollow ideology of a megalomaniac”. Roth also says that he was unsurprised by the abuses of power revealed in the wake of the MeToo movement. END_OF_DOCUMENT_TOKEN_TO_BE_REPLACED 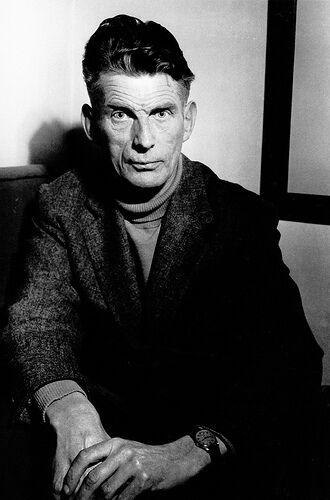 If you are feeling anxious about the Trump administration, perhaps it’s time to start reading Samuel Beckett. In a piece for The New Yorker published earlier this month, Jon Michaud revisits a novel penned by Beckett during the Second World War. This idiosyncratic text, published as Watt, is described by Michaud as possibly “the least loved and least read of Beckett’s major prose works”. But that is no reason to dismiss it. He praises its bleakness and its humour, while singling out its “uncompromising […] indifference to such readerly comforts as plot and accessibility”. END_OF_DOCUMENT_TOKEN_TO_BE_REPLACED

Well, no. But, nonetheless, her late-1990s dystopian novel, The Parable of the Talents, anticipates troubling undercurrents in the culture of the United States. And there are some noteworthy similarities to the 2016 presidential election. Open Culture reports:

“[I]n the second book of her Earthseed series, The Parable of the Talents (1998), Hugo and Nebula-award winning science fiction writer Octavia Butler gave us Senator Andrew Steele Jarret, a violent autocrat in the year 2032 whose ‘supporters have been known… to form mobs.’ Jarret’s political opponent, Vice President Edward Jay Smith, “calls him a demagogue, a rabble-rouser, and a hypocrite,’ and—most presciently—he rallies his crowds with the call to ‘make America great again.'”

The article also finds Trump predictors in a host of other pop culture sources, from The Simpsons to the Back to the Future franchise.