Posted By Rhys Tranter Published 18 May 201618 May 2016
Robert McCrum (The Guardian) counts down his list of the 100 best non-fiction books, and cites Sontag’s landmark essay collection at number 16 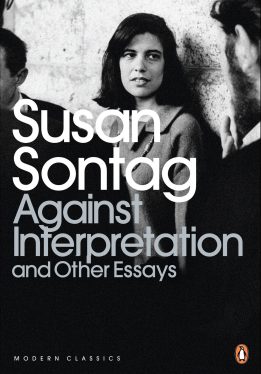 Susan Sontag saw herself as a novelist. The years between 1962, when she completed her first novel, The Benefactor, and 1965, when she began her second, Death Kit, were for Sontag “a sharply defined period” in which she wrote many of the literary critical and cultural pieces that came to define her even more strongly than her fiction.

In her Paris Review interview of 1994, Sontag confessed: “Writing essays has always been laborious. They go through many drafts, and the end result may bear little relation to the first draft; often I completely change my mind in the course of writing an essay. Fiction comes much easier, in the sense that the first draft contains the essentials – tone, lexicon, velocity, passions – of what I eventually end up with.”

Sontag’s earliest essays, nonetheless, have a heady and self-confident originality. This collection for instance contains two modern classics, Against Interpretation and Notes on Camp, as well as discussions of Lévi-Strauss, Sartre, Camus, Beckett, Godard, a memorable demolition of Ionesco, together with psychoanalysis and science fiction cinema. Sontag, who came to influence generations of readers around the world and saw herself at war with philistinism, was nothing if not transgressive. And always intensely varied.

“Sontag, who came to influence generations of readers around the world and saw herself at war with philistinism, was nothing if not transgressive. And always intensely varied.”

In the same Paris Review interview, she said of her writing that “it’s supposed to be diverse, though of course there is a unity of temperament, of preoccupation – certain predicaments, certain emotions that recur – ardour and melancholy. And an obsessive concern with human cruelty, whether cruelty in personal relations or the cruelty of war.”

Notes on Camp, which first appeared in 1964 in the Partisan Review, an early patron, fell to one side of that “unity”, but caused a sensation that propelled Sontag to instant prominence in American intellectual circles. Summarising Sontag’s reputation, Time magazine declared that “she has come to symbolise the writer and thinker in many variations: as analyst, rhapsodist, and roving eye, as public scold and portable conscience”.

Sontag would have been gratified by such a description. “I had come to New York at the start of the 1960s,” she wrote later, “eager to put to work the writer I had pledged myself to become.” Her aesthetic was, and would remain, omnivorous. “My idea of a writer: someone interested in ‘everything’… The only surprise was that there weren’t more people like me.” [Read More]