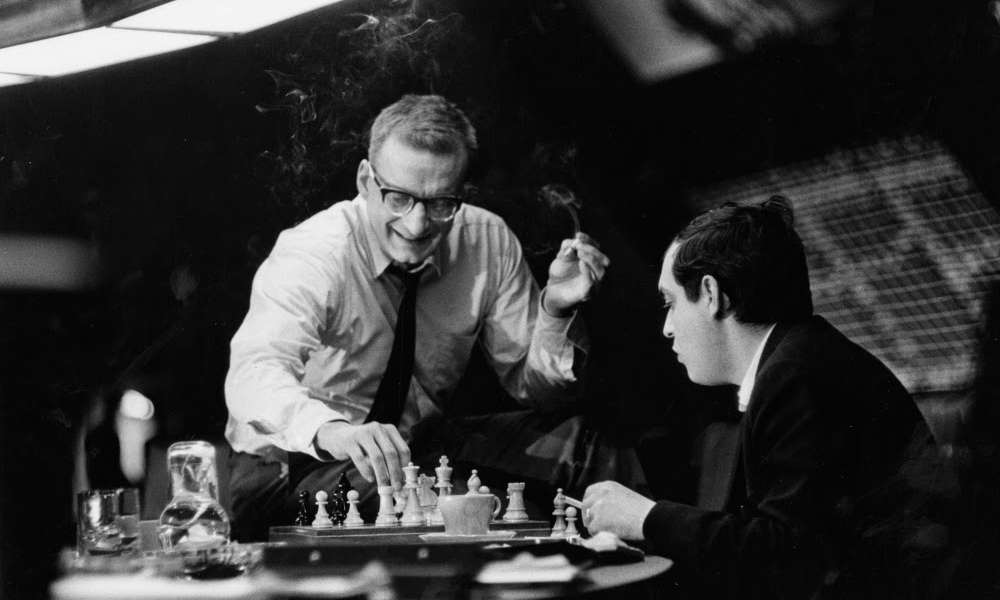 I told him I had a date with a chess hustler in Washington Square Park to play for money. Kubrick wanted the name. “Fred Duval” I said. Duval was a Haitian who claimed to be related to Francois Duvalier. I was absolutely positive that the name would mean nothing to Kubrick. His next remark nearly floored me. “Duval is a patzer,” is what he said. Unless you have been around chess players you cannot imagine what an insult this is. Moreover, Duval and I were playing just about even. What did that make me?

Kubrick explained that early in his career he too played chess for money in the park and that Duval was so weak that it was hardly worth playing him. I said that we should play some time and then left the apartment. I was quite sure that we would never play. I was wrong.

I wrote a Talk of the Town on my meeting with Kubrick, which he liked. I was thus emboldened to ask if I could write a full scale profile of him. He agreed but said that he was about to leave for London to begin production of what became 2001: A Space Odyssey. Still better, I thought: I could watch the making of the film. Our first meeting was at the Hotel Dorchester in London where he was temporarily living with his family. Kubrick brought out a chess set and beat me promptly. Then we played three more games and he beat me less promptly. But I won the fifth game!

Seizing the moment I told him that I had been hustling him and had deliberately lost the first four games. His response was that I was a patzer. All during the filming of 2001 we played chess whenever I was in London and every fifth game I did something unusual. Finally we reached the 25th game and it was agreed that this would decide the matter. Well into the game he made a move that I was sure was a loser. He even clutched his stomach to show how upset he was. But it was a trap and I was promptly clobbered. “You didn’t know I could act too,” he remarked.

The scene now shifts to the spring of 1972. I was spending the year at Oxford, and spent some Sundays with the Kubricks. Our interest again turned to chess but this time it was with the imminent match between Bobby Fischer and Boris Spassky in Iceland. One Sunday, Kubrick and I watched Fischer’s interview with Mike Wallace for “60 Minutes.” It was around the time of Fischer’s birthday and Wallace had come with a cake. “I don’t like that kind of cake,” Fischer said graciously. Then he told Wallace how he had learned to play chess. His older sister had taught him the moves. He soon began beating her so he spotted her pieces. Then he said that that no longer worked so he began playing with himself—Fischer vs. Fischer. “Mostly I won,” he commented with no trace of humor.  [Read More]